I remember it well! Hmmmmm, remembering it well could be a stretch given it was over 20 years now, where did THOSE years go, but the excitement of it all still remains though. They were the days!

Unlike today which was spent fighting with a card design for the “Unconvention” Swap. The insane thing is that I had drawn up the sketch, nominated all the colours and stamp sets I was going to use yet when I came to make the card last night, I just had to keep tweaking it didn’t I?! Four hours I spent working and reworking the design only to come down to the studio this morning and do it EXACTLY as per my sketch and voila – looked great!

I’m going to blame last night on Barnaby as I was doing okay until I realised the ABC had put Midsummer Murders back on Saturday’s nights! Yes, it’s sad but true, I do love the  old Barnaby. As totally as predictable as it, I just enjoy it so much. What can I say it’s just another of life’s little mysteries!

I came close to putting a photo of the swap card here tonight after all I’ve been through with it over the past 24 hours but just in case someone visits I don’t want to ruin the surprise… or worse, have someone dreading the receiving of my card… however I will share a card I did last year for my darling hubby’s boss’s birthday (try saying THAT six times fast!). 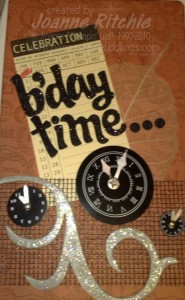 It was one of those cards that I had a very definite idea of what I was going to do yet when it came to constructing the card the end result was completely different to what I had originally started with. I love it when that happens – you start building the card and without any thought or procrastination, it simply comes together. Just wish it could happen that way more often!

Anyways, time is ticking and I have a HUGE week ahead so I’d best head to bed. No, I’m not attending the Stampin’ Up! convention in Sydney this week-end as has been on my calendar for months now and was my intention, but I do have Miss Six turning SEVEN next Sunday so the necessary arrangements must be made over the coming week. What a production, LOL !

And besides, Webber is leading tonight’s Grand Prix so now is a good time to retire!!!

One thought on “Ahhhhhh, the Formula 1 in Monaco…”