I sometimes wonder if my expectations of how my week is going to be, or at least begin, are just too high as I seldom seem to begin the way I have planned. I really wanted to get down into the Studio today as, even with Father’s Day celebrations yesterday, I managed to spend a little time down in the Studio which really had my creative juices flowing hence I wanted to do more of the same today. Alas though, it just wasn’t to be.

Not to say it wasn’t a good day, how could it not be with my Darling Husband home, plus BOTH the house, car and ironing pile are all looking fabulous, and the hubster has returned to work with a freshly made fruit cake – so fresh out of the oven it was still warm when packed!

As I wasn’t able to complete what I so dearly wanted to show you tonight… Artistic Etchings is my new favourite… but only until my Elements of Style arrives I’m sure. In the interim I’ll show you an old favourtie, the Medallion background. These are the three cards from last month’s Technique class – two using the Medallion, the third using Baroque Motifs. The first card is using heat embossing (this card was influenced by one of the talented ladies over on NING – Juliette Ann Chapman). 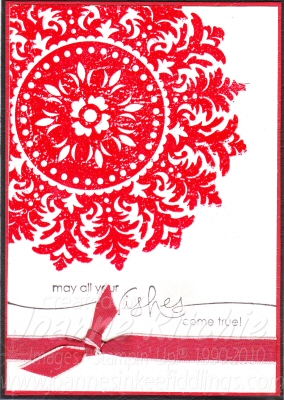 This second card is embossing resist. First a background was chosen and stamped, then the Medallion was heat embossed in clear. Over this then a colour was sponged until the desired depth was acquired, the clear embossed image was given a quick wip over with a baby wipe and voila… this was the end result. 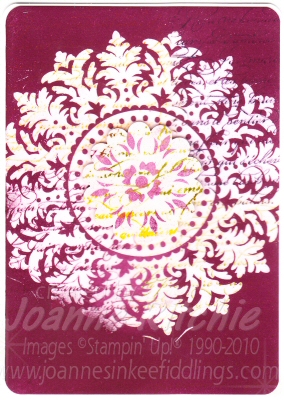 The third card was the Faux Metal Technique. This is where you become a Swedish Chef as the silver embossing powder is heated and melted in three layers, then following the third heating you quickly place your chosen stamp into the not-yet-set melted embossing powder. I did want the centre of the Medallion stamp for this card but it wasn’t working so changed to the Baroque Motifs and a stamp from this set. The flourish and the sentiment were both heat embossed. 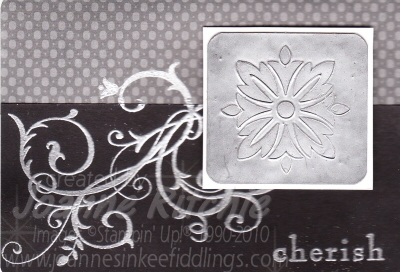 What did Mr and Mrs Chicken call their baby?
Egg…