The 2013-2014 Stampin’ Up! Idea Book & Catalog although now available for fondling, won’t go live until June 1st. Actually it will go live Friday 31 May because of exactly that, it’s a Friday. If it went live on the Saturday, should there be any questions or queries for Stampin’ Up! the offices would be closed hence it begins a day early… woo hoo, lucky us!

And what’s even more exciting, there’s an additional three days grace on the Retiring Lists from the current catalog that expires May 31. One now has until June 3 to place orders. Which sounds strange to some given we’ve known for a year when the catalog expires but sometimes, even with the best intentions, things don’t always go to plan.

So instead of sitting around watching the calendar until 31 May, let’s make the most of the many, MANY promotions that are currently running with Stampin’ Up! The first being the list of the retired stamps. Hopefully if you click on the picture below you will be taken to the Retiring Stamp List! 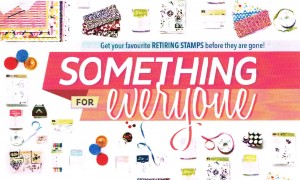 And let’s not forget the accessories. Some of the accessories have been discounted but not because they are being discontinued but what I think so now don’t quote me might be happening is a change of design. Once again, I’m hoping if you click on the picture, it will take you to the Retiring Accessory List!

I look forward to chatting with you soon!