Oh my goodness… I’ve only just realised I haven’t uploaded any pics from my July classes. Dang fridge, it put me off track completely! For July’s Make and Take’s I chose the set “Party Hearty“. I’ve always found that even though the party hat stamp in this set is cute, it was a tad off-putting. For this reason I challenged myself to create three cards for three very different people. Let’s see what you think. 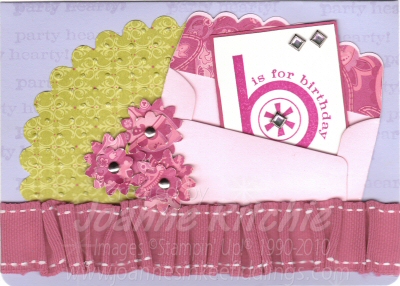 I just love the card above. I used the Almost Amethyst which I adore but has just over three weeks before being retired. I know once the new colours come out I’ll be thrilled and will be wondering how I ever lived without them but right now, with the clock literally ticking on so many colours being retired, I guess you could say I’m beginning to becoming a tad nostalgic about them. Well, as nostalgic as one can about a colour!

I’ve been wanting to try the ruffled ribbons for quite some time so this was the perfect excuse. I also used a few Big Shot bits on it as well. For example, the Scallop Card Die Cut was used, the DSP was then cut from the Scallop Circle Die Cut before being run through the Polka Dot Embossing Folder. Have I ever told you how much I love my Big Shot?! (lol) 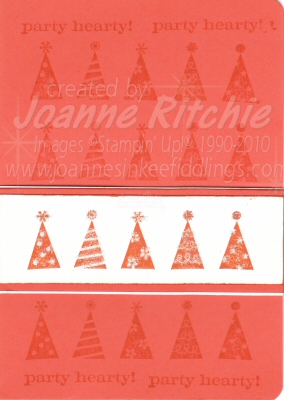 Tangerine, or orange as I tend to think of it as, is not a colour I reach for very often so thought the “Party Hearty” set was the perfect time to stretch myself. This card is bare in comparison to the first once but I really think it works. 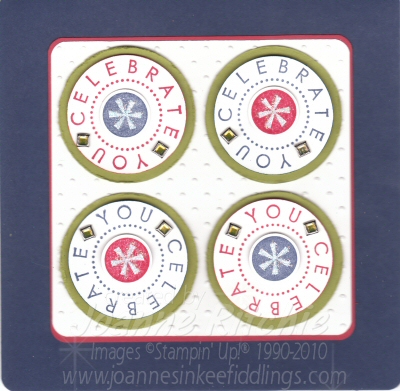 The third card design simply wasn’t coming to me so I decided to think outside of the box by working WITH a box, that is a 6″x6″ square card. There was a time I made nothing but either the square cards or an A5 card but now, not so much. And did you see, I even managed some Big Shot Die Cuts on this card… the Polka Dot Embossing Folder and the Old Olive circles were cut with the Circle Die Cut. Oh, how I love my Big Shot!