We had dinner with my parents last night and that was the last I saw of Master Nine… guess who’s grandparents watch the football and who’s parents DON’T? No prizes in guessing it’s Master Nine. As we had dinner he realised it was going to be much more fun to stay where he was with his “own kind” (often these afflictions skip a generation...) then coming home to sit alone upstairs watching it.

Then when he called this morning to check on what time I’d be collecting him today he was rabbiting on about the two MORE matches that were to be played this evening… “would you like to spend another night with your grandparents mate?” I’m sure you could hear him from where you were. I’m curious now to hear if he  stayed awake through both matches – I know he would have given it his best shot!

Girl Child and I on the other hand arrived home last night, changed into our flannies and were straight into the Studio until late. Then first thing this morning we back into it although it was about 2’ish this afternoon I lost Mini-Me. There’s a school disco on Thursday night so she felt her time would be better spent ensuring she had the right outfit for the night and practising her dance moves. She’s growing up WAY too fast!

I’ve been busy all day but it was with putting the finishing touches to my workshop box. I have a little box, well it’s a big gold star basket actually, that I fill with interesting Off-the-Page items I like to do in my workshops. I think I’ve already mentioned how this week I’ve been redoing a lot of the items due to card-stock and DSP retirement, but I’ve also been waiting on the new sets for the wording on these items in order to complete them so… with my order’s arrival, that’s what I was doing today.

Another thing that arrived this week with my last last chance order was the stamp set, Thoughts and Prayers. It’s been on my wish list for so long so once I saw it was in the new catalogue I finally bought it, from the old catalogue. No point in buying an old set from the new catalogue is there? Today I made my first card with it and took my design directly from the new catalogue as that’s what it is called isn’t… IDEA Book and Catalogue?! 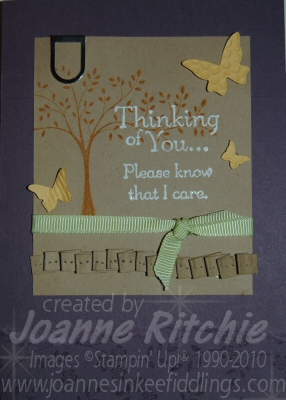 Hope you’re having a great week-end!