Well, it would have been if Pish Posh hadn’t been lapping the house for what seemed like hours and hours!

I couldn’t work out why she was zooming around the  house like a mad cat until this morning when she began it again. This time though I was in the bedroom  so could see where this cat was running too – she was running into the children’s bedrooms. Both children had sleep-overs at friend’s houses last night so obviously Pish Posh was missing them – what a little sweetheart she is!

I, on the other-hand, missed the children but did accompish a lot in their absence. Although I did have my doubts intially as to how much I was going to get completed as it was 10.30 before I arrived home yesterday morning after dropping the children at school then doing some errands and I still had to clean the house. JUST clean the house… HA… as if!

Yep… it was 6.30 before I finished getting the house into order last night and headed down to the Studio. It was my own fault of course for putting off a lot of those little chores “until tomorrow” combined with a week’s worth of washing and folding. I’ll say never again will I do this but I think we both know that as housework isn’t my strongest card… it WILL happen again!

Anyways, once in the Studio knowing I was free of interruptions I was able to play. I experimented with one basic design using three different colours. The first was with Really Rust – Fond Farewell #18. For the hearts I simply embossed the card-stock with the Perfect Polka Dot embossing folder then used the Full Heart – Extra Large punch. I used the large stamp from Baroque Motifs on the Really Rust background in Really Rust and used the Weathered background in Versamark on the Ivory overlay. Not that  you can see it in this picture no matter how much you squint your eyes. 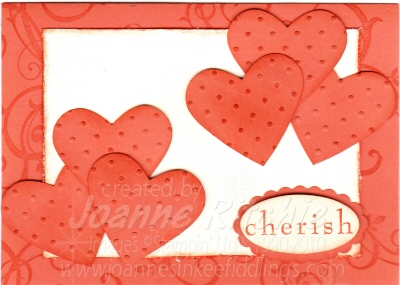 The next card was a big surprise as I used the Bordering Blue – Fond Farewell Colour #19. This colour I’ve always regarded as more as a dirty blue so have had little interest in it… until today that is. Embossing the card-stock changed this colour completely, it became almost silver in appearance and once the card was constructed the colour as you can see is more like Almost Amethyst, very nice!

The colour in the next card has scanned as if it’s pink rather then it’s actual colour, Ruby Red – Fond Farewell to Colour #20. For this card as you can see I still used the six punched hearts in two groups of three and the scalloped oval with sentiment. Instead of using any layers though I simply stamped the background with En Francois in portrait instead the landscape format I had in the other two. 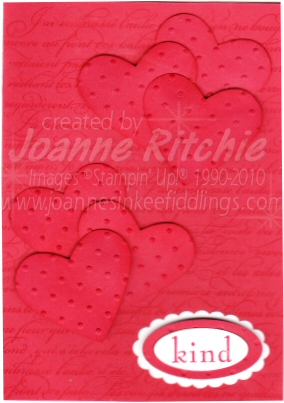 What do you get when you cross a cow with a duck?
Milk and quackers! 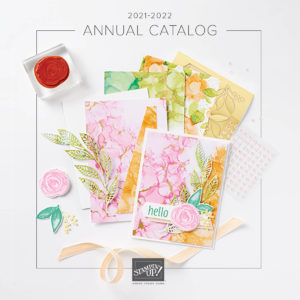 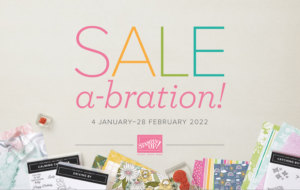