When I first saw this week’s Mojo Monday sketch I was a tad hesitant but on looking at it again today, oh my gosh, it took absolutely NO time at all. This is my card. 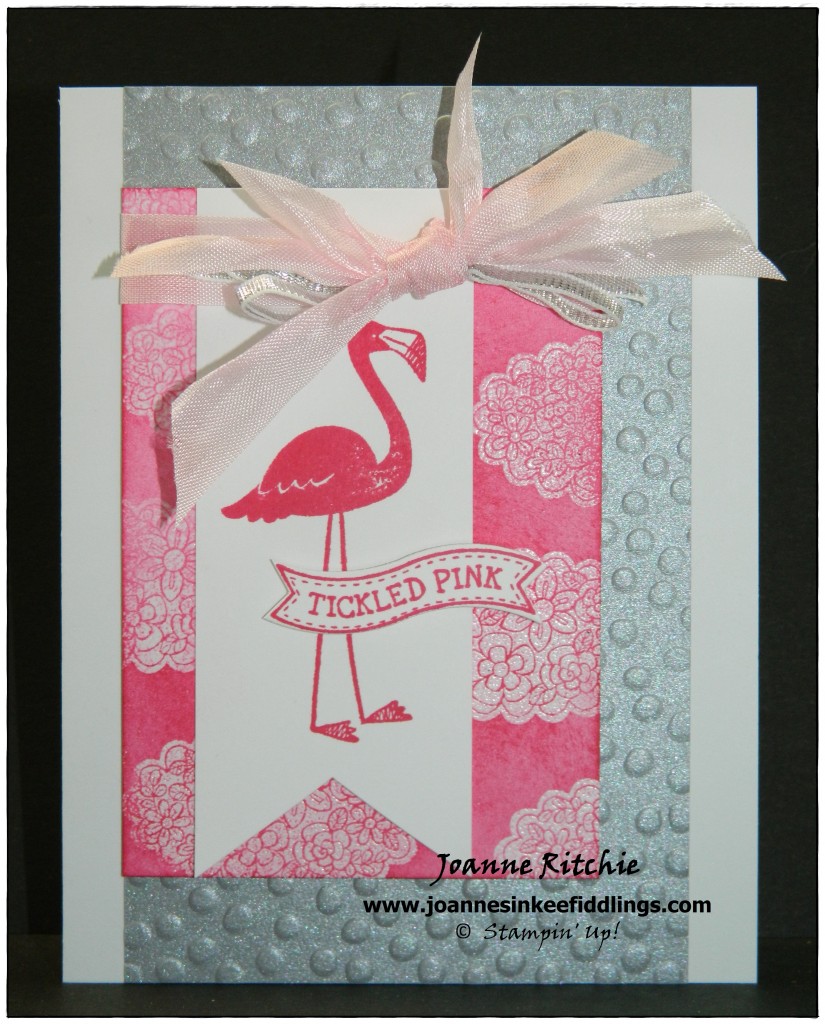 This is the sketch.

For something different for my background I chose Brushed Silver Cardstock which I embossed with the Decorative Dots Embossed Folder. Then onto my cut Whisper White Cardstock I heat embossed one of the stamps from the Flamingo Lingo Stamp Set. 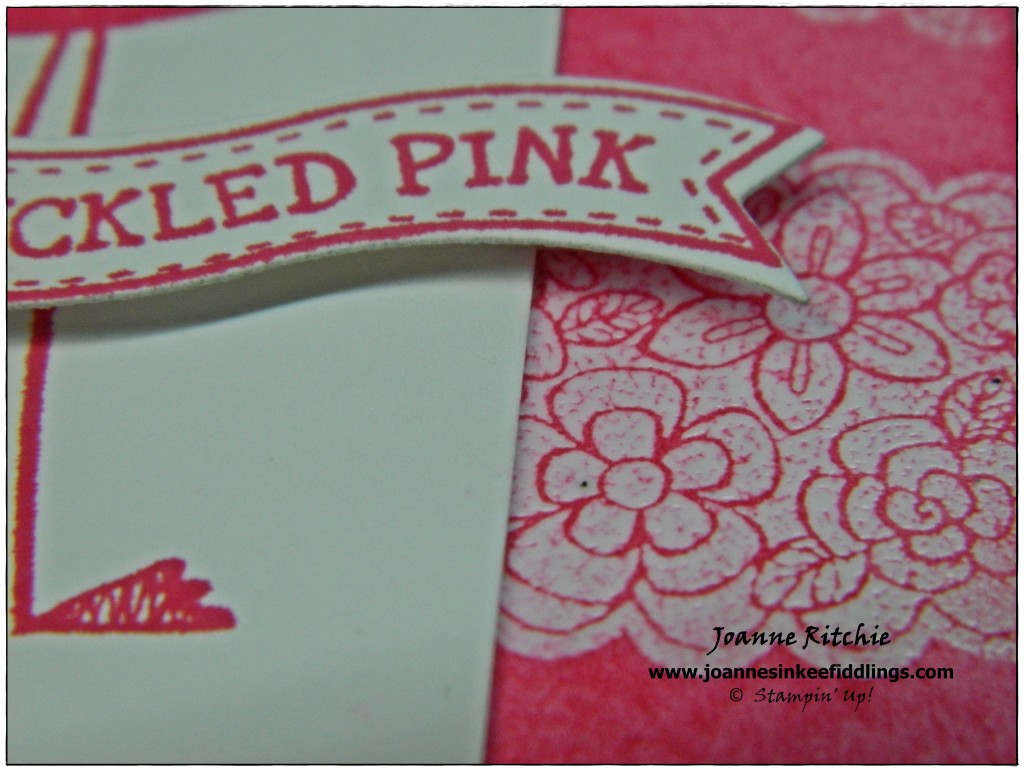 After adhering this onto the Melon Mambo background I tied 1/8″ Silver Ribbon and 1/2″ Pink Pirouette Seam Binding Ribbon around the top then added the stamped banner Tickled Pink. 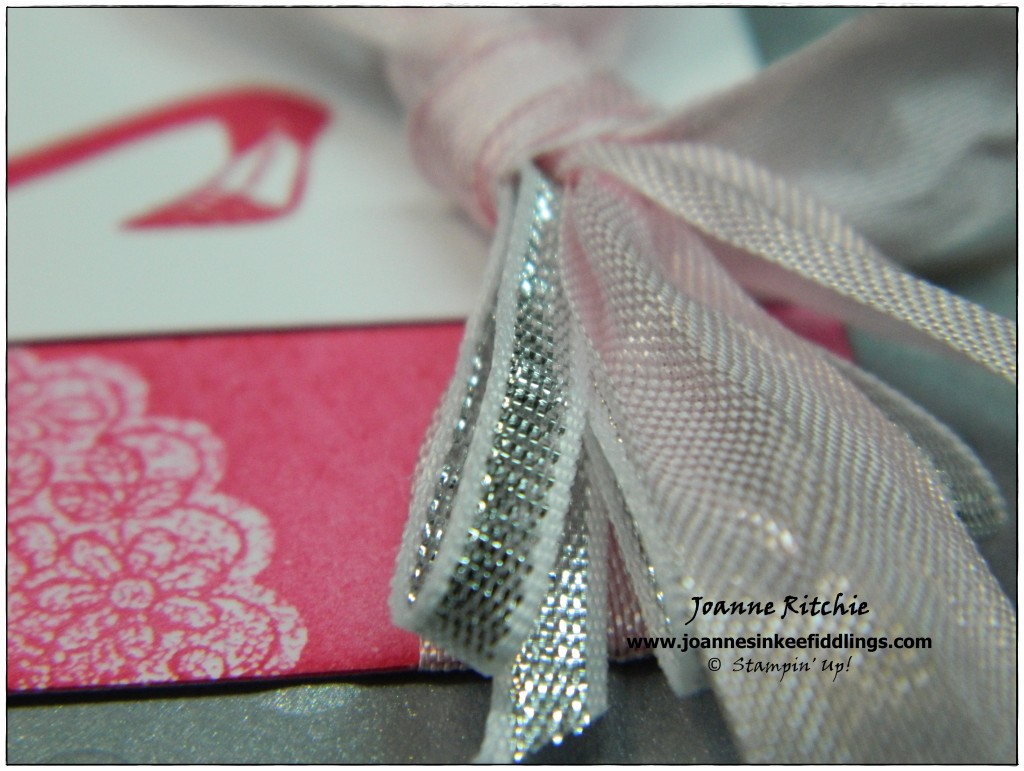 This Summer Vacation has been one of our best but it’s playing havoc with my schedule. Seriously, I often don’t know what day of the week it, with one day slipping into another, oops! So finally, here is my card for this week’s Mojo Monday. 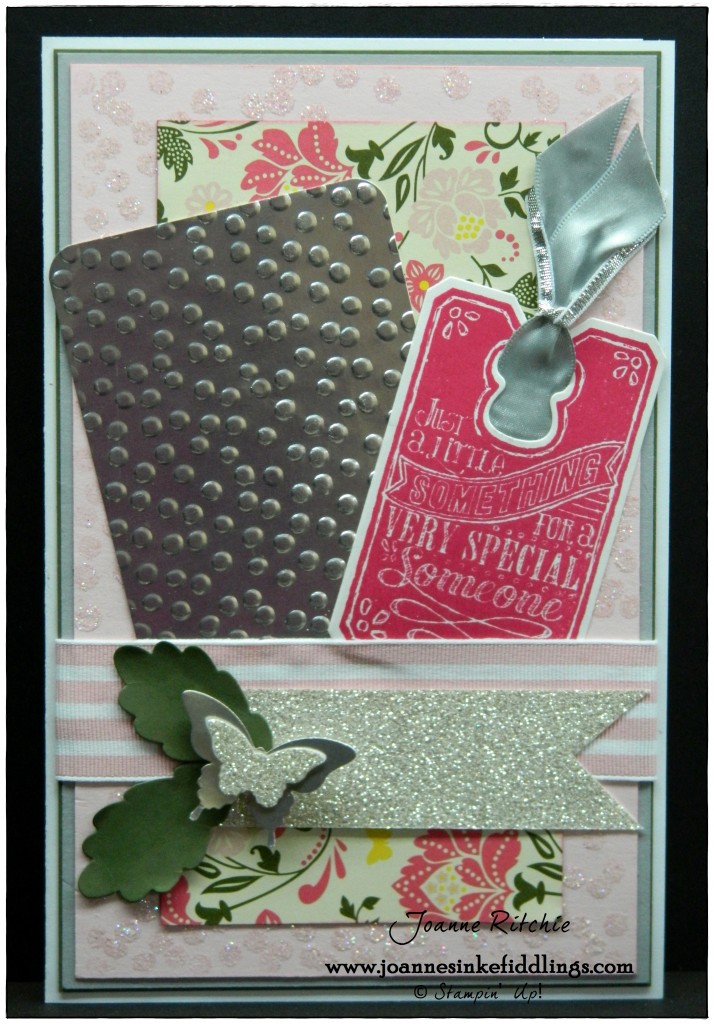 Here is the sketch. This week’s sketch I thought was going to be SOOO easy but once I began assembling the card it proved much harder and took MUCH longer than I thought (and hoped)! DSP from the All Abloom DSP Stack was my spring-board.

I was determined to use the new Dotty Angles Photopolymer Stamp Set and for same strange, strange reason challenged myself to use the heat and stick powder with it for the background. It gives the right effect when combined with Dazzling Diamonds but I still need to practice with it… a LOT, lol! 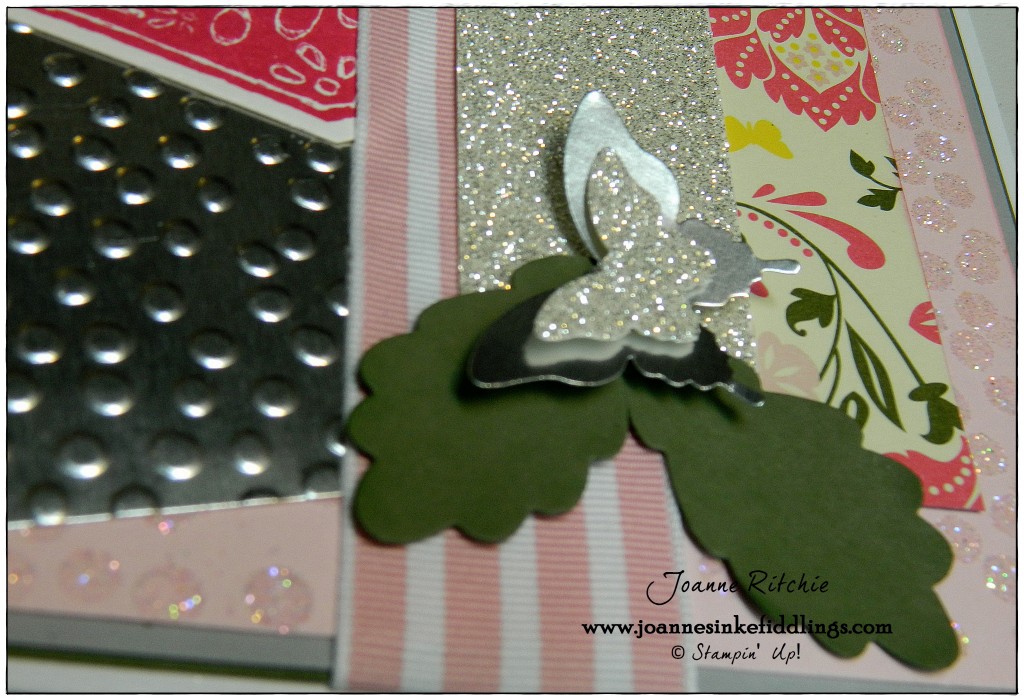 The leaves are from the new Flower Fair Framelit Set. In hindsight I wish I’d used the co-ordinating stamp from the Flower Shop Stamp Set to stamp over it – next time. The butterfly was made from two Butterfly Punches – the Elegant Butterfly in Silver Foil Paper, the Bitty Butterfly in Silver Glimmer Paper. 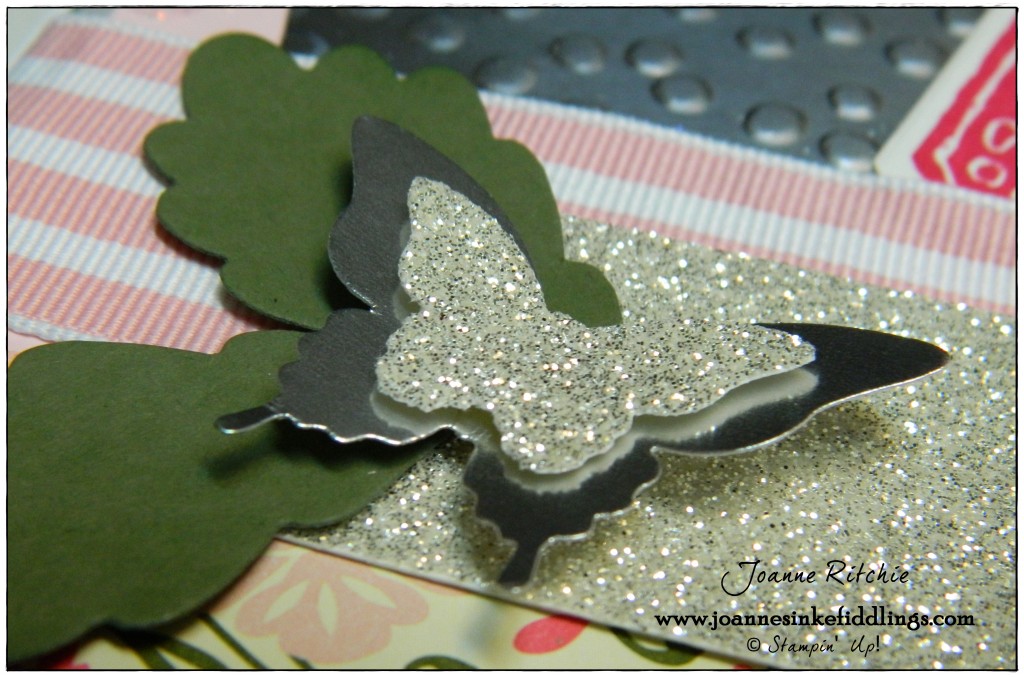 The sentiment is from the Chalk Talk Stamp Set and cut with the co-ordinating Chalk Talk Framelit. I stamped it with Melon Mambo Classic Ink onto  Shimmery White Cardstock which you can just see coming through the pink. Noice! The Silver 5/8″ Satin Ribbon was doubled over then adhered JUST under the cardstock, then tied off with some 1/8″ Silver Ribbon. All the ends of the ribbon have double-sided tape on it assuring they stay in place. 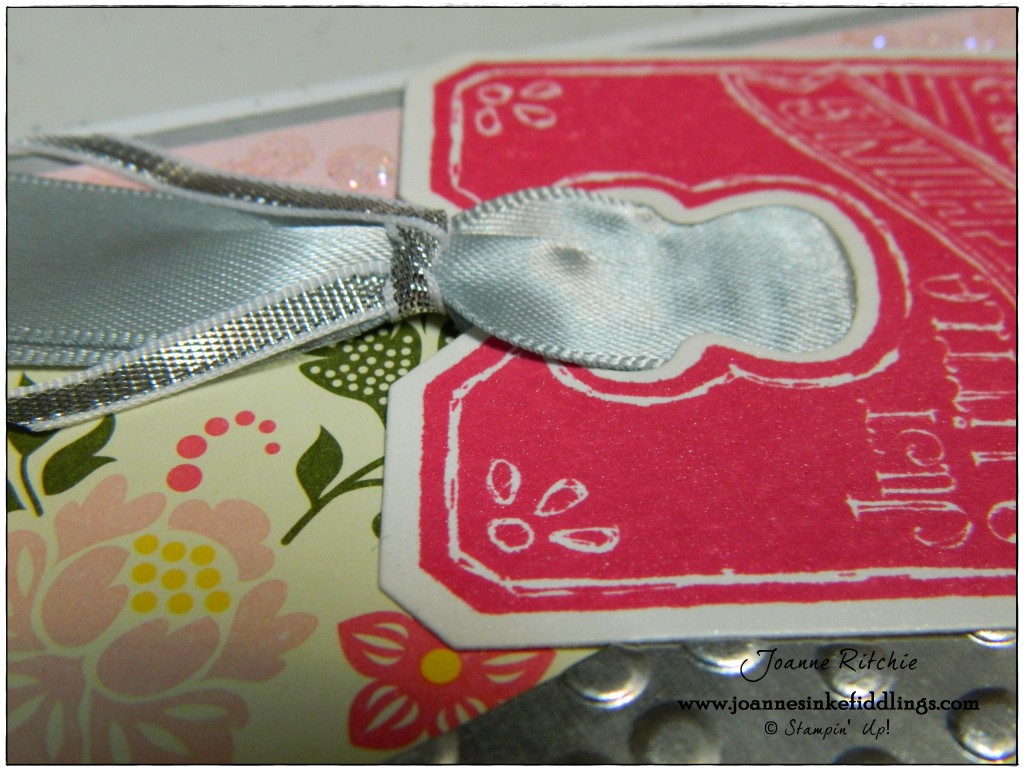 Hope you are having a wonderful summer, enjoying whatever you are doing and being with whoever you are with! 🙂

A quick card doesn’t mean a card need lose any of its charm and I think this card exemplifies this beautifully. The urge to add a border of Primrose Petals or Melon Mambo Cardstock under the Whisper White Cardstock is still great but so far I’ve resisted! 🙂 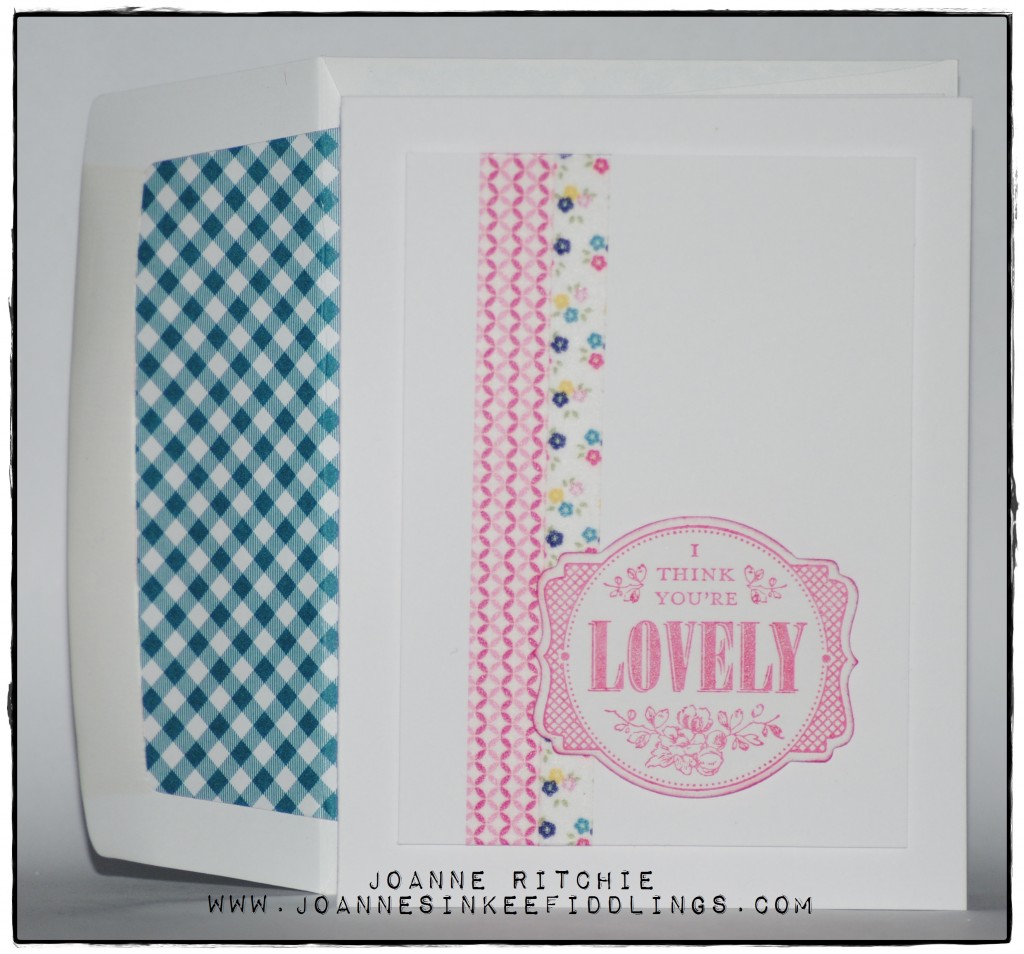 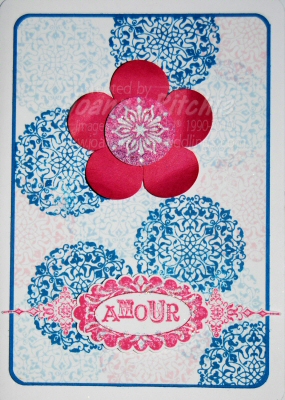