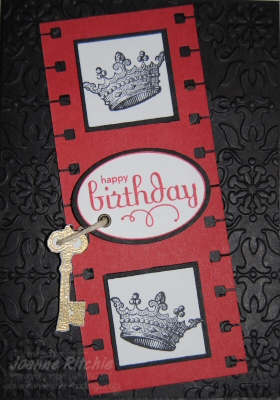 What an amazing it day it’s been today and here it is 11pm and I’m still going… not bad considering I only managed FOUR hours of sleeps last night… and the only thing I probably haven’t achieved was any time down in the Studio but hey, today I can live with that!

I’m still in disbelief as to what I’ve achieved all because of some plants! Yes, you read it correctly… plants! It’s always annoyed me that we inherited a front garden that wasn’t quite planted up correctly. I ask you, who in their right mind plants bromeliads into full sun… WHO? So this week-end, we’re righting a wrong!

Having put out an SOS to a dear friend, I was locked and loaded to collect what I thought was some mere cuttings mid-morning.  Preparations for school, returns made, and  a grocery shop and unpack were all made in record time before heading out for these cuttings.

CUTTINGS! Hello, I returned home with the back of my car looking like a nursery – 2B’s I can’t thank you enough. Of course, the majority of these plants needed to be in the ground TODAY so home I went but before I could get to the garden I needed to sort the cupboards under both vanities, reorganise the walk-in robe, vacuum the entire house, take some of our excess to the basement and get gardening gear sorted… that’s all… oh nearly forgot, we also have two extras for sleep-overs tonight!

After all this I didn’t get into the garden until almost 4pm but what I did in an hour impressed even ME. Although after all one side was dug up and planted up, I will admit I did feel a little bit of the dill standing their watering my new plantings… in the rain (lol). So Phase 1 of the full-sun area is complete, tomorrow we start on the shaded area… bring it on!

After all that I feel bad I haven’t a card now highlighting plants in some way. Perhaps tomorrow I’ll squeeze in a butterfly or two to celebrate our gardening achievement. In the meantime here’s a little deja vu as you’ve seen this card before but in one of the retired colours so I’ve redone it to bring it up to speed, so to speak.

This card uses the wonderful Medallion Background combined with Versamark and Stampin’ Pastels. Whenever I get the pastels out it alwasy leaves me wondering why I’m not using them more as the effects and depth of colour you get from them is just fabulous. And no card would be complete at present without an Antique Brad! 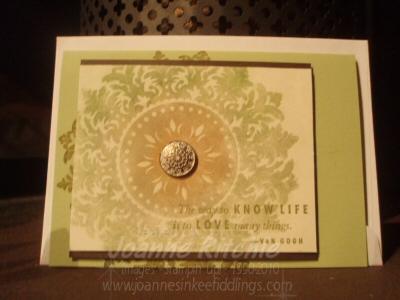